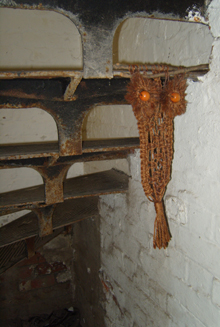 Initial Assessment and History
This Macramé Owl was found emaciated (in veterinary terms) under the stairwell of an abandoned building in July 2009.

He was frightened and cold, and showed some signs of abuse. We suspect he had been there for days without food or water, yet he remained in remarkably good shape.

Since the rescue, it has come to our attention through Macramé Owl expert Sergé Jawolsky, who identified Horace as a Scrawny Tawny Macramé Owl, that his physiology and stature is typical of this variety of Macramé Owl, and that Horace is only slightly underweight. This has come as quite a relief.