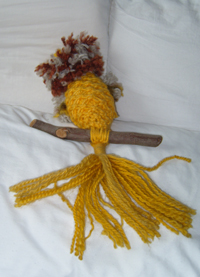 While Skippy has stabilized, he remains in ICU. The jaundice has persisted. We suspect this may be the long term result of poor nutrition. Skippy has been assessed by an RMN (Registered Macramé Nurse) and we are now seeking a professional to perform reconstructive surgery, and a donor for a beak transplant.

A suitable beak donor has still not been located, and hope for Skippy’s complete recovery is diminishing. He remains in ICU under 24 hour surveillance.

We have accepted that a beak donor is unlikely to be found. Skippy’s remarkable lust for life is an inspiration. Somehow, he has pulled through the worst stages of his trauma. The RMN says that while Skippy’s original colouring may never return, it is believed that he will be able to survive long term without a beak. Astonishing.